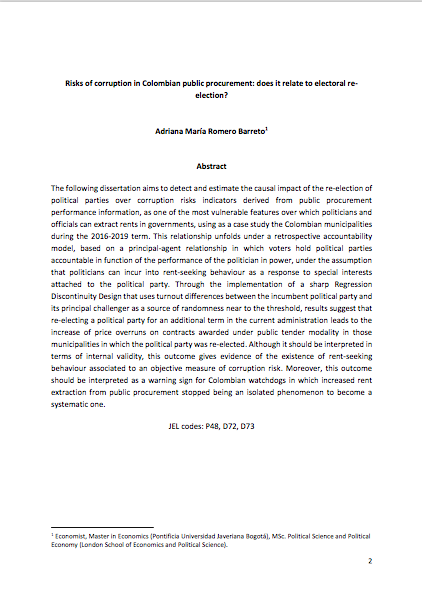 Risks of corruption in Colombian public procurement: does it relate to electoral re-election?

The dissertation is focused on how to detect and estimate the causal impact of the re-election of political parties using corruption risks indicators drawn from public procurement outcomes data to present it as one of the most vulnerable areas that can be exploited by politicians and officials to extract money from governments. To illustrate her point, she cites information drawn from Colombian municipalities during the 2016-2019 goverment term as a case study.

The findings suggest that there is a correlation between the re-election of a political party for an additional term in local government and a subsequent rise in incidences of overcharging for contracts awarded as public sector tenders in those municipalities in which the political party was re-elected.

Although a degree of internal validitation should be applied to the findings, the results do prove the existence of profiteering type behaviour which is associated with an increased risk of corruption. Furthermore, the results of this study should serve as a warning sign for Colombian watchdogs to show the way in which overcharging and profiteering in public procurement has ceased to be an isolated phenomenon, and has instead become much more endemic and systematic.