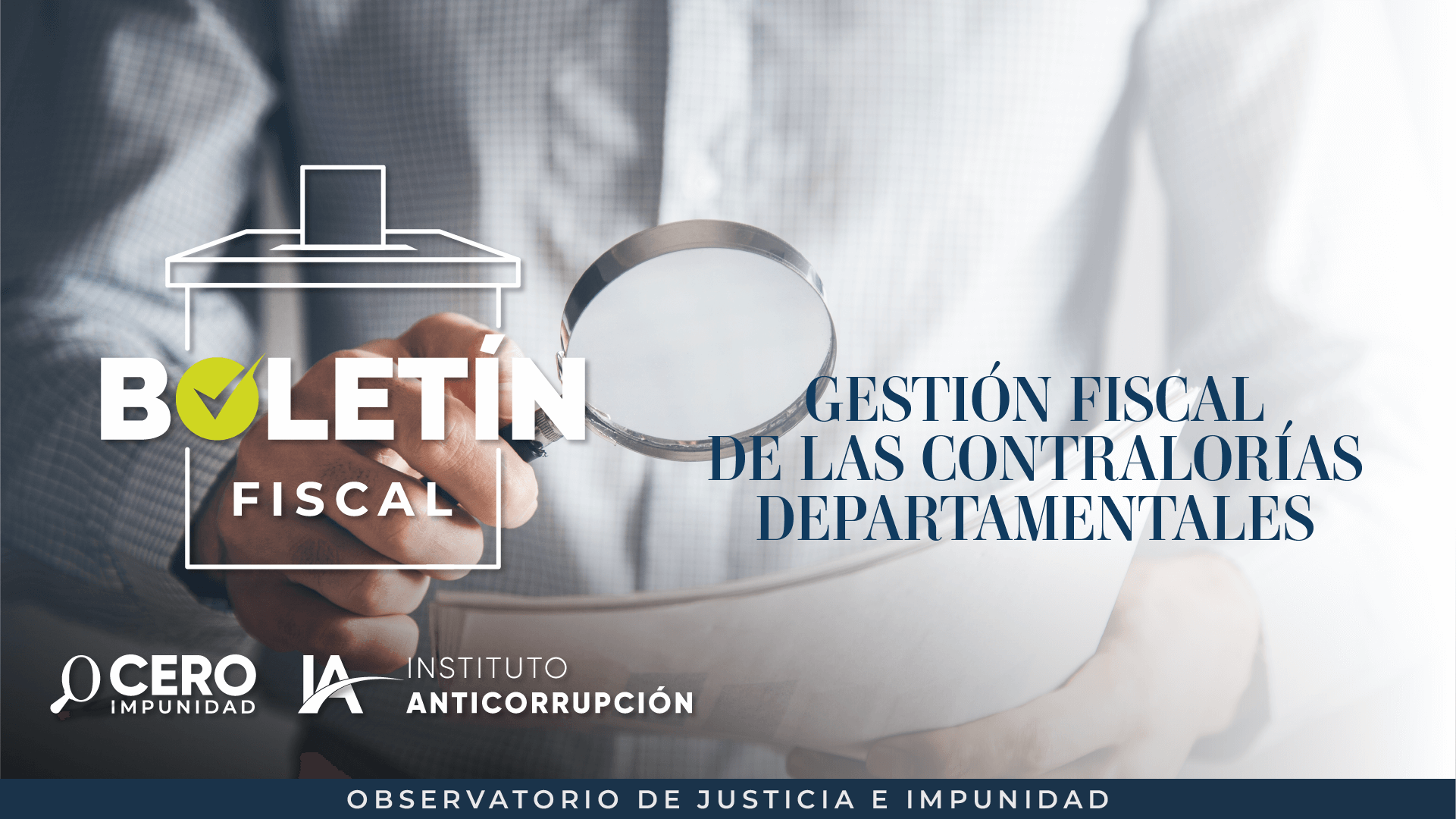 Below, we present some of the most relevant findings of this research.

Fiscal management of the GDCs

As illustrated in the following graphic, there is a high concentration of fiscal responsibility processes in six departments (Bogotá D.C., Bolívar, Tolima, Boyacá, Santander and Cesar), which consolidate 4,121 processes that add up to around 16 billion Colombian pesos. However, Bogotá has the majority of the processes with 1,382, which account for a total of over 15 billion Colombian pesos.

The GDCs that resolved fewer processes were Guainía, Guaviare and San Andrés; processes that, altogether, amount to a combined total of 25 billion Colombian pesos. The GDC of Atlántico, Magdalena and Valle del Cauca, despite the fact that they resolved few processes (765), accounted for an exorbitant amount of money – together, they represented an alleged patrimonial cost of 1.1 trillion Colombian pesos. In stark contrast, GDCs such as those in Amazonas, Caldas, Cauca, Chocó, Nariño, and Risaralda resolved more lawsuits, but for much smaller amounts.

Regarding processes that were ultimately archived, the following graphic shows that only 8 departments in the country, including the Bogotá Capital District, have a concentration of over  half of the total archived processes (3,638 processes out of 7,069). These departments correspond, from largest to smallest, to: Bogotá, Bolívar, La Guajira, Boyacá, Tolima, Cesar, Santander and Huila. Together, they contract over 9 trillion Colombian pesos. Of these departments, the GDC of La Guajira is the one that, proportionally, represents the largest number of processes completed with a file order, with 97 of every hundred processes brought archived.

Number of fiscal responsibility processes filed between 2014 and 2021 by the Collegiate Departmental Management.

Regarding the most worrying reasons for archiving processes, that is, those that raise an alarm in the way in which fiscal responsibility processes are managed and terminated, and reflect the lack of technical capacity of the GDCs to carry out the processes in a satisfactory manner. The reasons for archiving these processes are: i) nullity; ii) expiration and iii) prescription. The departments of Bolívar, Caldas, Córdoba and Bogotá have a disturbing number of 734 cases archived for these reasons, amounting to a total of over two trillion Colombian pesos. The Putumayo GDC also stands out, given that 51% of its processes end up being archived for the previously stated reasons. The departments of Atlántico, Valle del Cauca and Antioquia have similar performance when it comes to processes being archived,  with a concentration of half a billion Colombian pesos

The coercive collection process that is led by the Comptroller General of the Republic (CGR) refers to the process of direct collection of the amount of the ruling for fiscal responsibility, by those stakeholders whose activities have an impact on public assets. From 2014 to 2021, 2,440 unique coercive collection processes were registered. Of this total, 50.5% correspond to judgments declared between 2014 and 2021, which involve an amount of over 4.5 trillion Colombian pesos and have an average duration of 10 years. The remaining 49.5% corresponds to rulings declared in periods prior to 2014, but which, having not paid the debt, continued in force; these have an average duration of 8 years and total a little more than 2 billion Colombian pesos, which haven’t yet been repaid.

In general terms, regarding the efficiency of the collection or recovery of public assets, it is worrying that the majority of GDCs register a capital balance that is higher than the value collected. Of the total processes analyzed, only 6% of the damaged public assets have been recovered, that is, 0.3 of 6.5 trillion Colombian pesos.